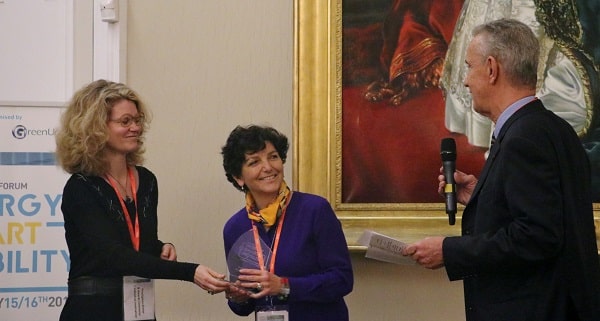 Among the highlights of this first edition : a startup contest

Capenergies cluster for competitiveness and GreenUnivers, leading media company in the energy transition markets, organised on February 15 and 16, 2018 the first European Energy for Smart Mobility Forum. Dedicated to innovative energy solutions for electric mobility, this first edition featured several highlights including a startup contest. Sixteen companies from three different countries (the United States, France and the Netherlands) pitched in front of a jury of independent experts, chaired by Bernard Tardieu, chairman of the Energy and Climate Change Committee of the French Academy of Technologies, and sponsored by the HSBC group.

Five startups were awarded during the ceremony that took place at the gala dinner held at the Palais du Pharo.

Focus on the 5 awarded startups :

Founded in 2017, Bovlabs is an American venture developing solutions in the field of blockchain applied to energy (its acronym means ‘Blockchain of value Labs’). Its goal is to trade energy in peer-to-peer mode on a secure platform with a minimum transaction cost. The company cooperates with storage, micro-networks or smart meter players, in order to build its position in the marketplace.

Electric mobility is a field of application for Bovlabs, whose purpose is to create an ecosystem combining charging infrastructure owners and operators of decentralised grid willing to sell their energy surpluses. Bovlabs has been selected as part of Thecamp accelerator programme which takes place in Aix-en-Provence (France).

The start-up from Grenoble (France) aims at democratising the use of electric bicycles. Since its creation in 2015, it has developed solutions in motor control, embedded connectivity and data analysis in order to improve performances and reduce global electric bike cost. More precisely, these technologies allow the removal of some components and reduce the battery consumption.

Its first product is a connected controller that manages the battery for a given ride, via a smartphone application. Cyclists enter their bike rides and their personal data (sex, weight …) online. This information is transmitted to the controller. ‘Connected directly to the battery, it can regulate its use for the whole journey’, explains Maël Bosson, co-founder and CEO of the startup.

Created in 2015 by the Dutch green energy producer Eneco, Jedlix launched in 2016 an application aimed at optimizing the use of renewable energy sources for electric vehicle batteries charging. Nowadays, more than 1,000 charging stations have already been networked. Jedlix works with several major manufacturers including Renault.

Both partners designed an application called Z.E. Smart Charge which optimises the management of electric vehicle charging to profit from low prices when the volume of renewables is high. Users indicate the level of charge they want and the time of departure of the car. After ensuring the minimum recharge required by users, the application manages the add-on in smart charging mode.

Artificial intelligence also gains electric mobility!  As proven by Ween.ai, a platform launched in 2017 by Ween, a startup based in Aix en Provence (France), which is presented as the first real-time prediction solution to plan the arrival of users in a place in order to adapt it to its use. And this is possible without sending private information to the cloud via a low-consumption geolocation system and a patented algorithm.

In the field of electric mobility, Ween.ai enables electric vehicles to optimize their charging schedules and to anticipate the activation of heating or air conditioning. This solution certainly is a worthwhile asset to preserve the autonomy of the vehicle and to better integrate renewable energies in charging.

The company was founded in 2014 in Marseille (France) and offers an electric car-sharing service (nearly 200 Twizy) in free-floating mode, available 24/24 and 7/7 with free parking. Totem Mobi provides a mobile application that geolocates the user in real time and offers to rent available vehicles in a few clicks. The solution is designed to be complementary to public transport networks for the last mile/kilometer for individuals and businesses. Its target group is the active young adults.

In addition to this activity, Totem Mobi provides another service called “The Media”, by which advertisers and agencies have the opportunity to display their brand, company, product or event on vehicles. A mobile and ecological communication media.

The winners won prizes awarded by the partners, HSBC and Business France, and the organisers, Capenergies and GreenUnivers.