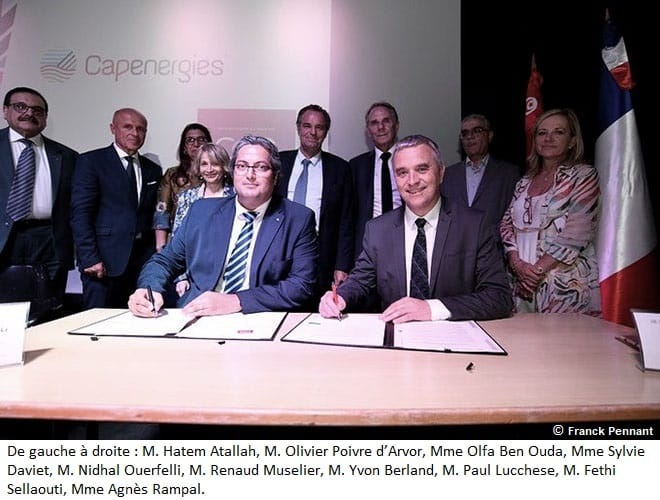 Increased cooperation in the Mediterranean area:

On 15 July 2019, Capenergies, the competitiveness cluster for the low-carbon energy mix, and the CEA’s Regional Operational Representation for the countries of the Southern Mediterranean, the Middle East and Africa signed and exchanged letters of intent to strengthen their cooperation in the field of energy transition. This exchange of letters was formalised during the visit to Tunisia by a delegation from the SUD Provence-Alpes-Côte d’Azur region led by its president, Renaud Muselier.

The two entities affirmed their shared commitment to work together, including in this endeavour the partners from the southern shore of the Mediterranean, the Middle East and Africa, the public partners and companies from the SUD Provence-Alpes-Côte d’Azur region and also teams from the CEA. The aim of this partnership is to organise collaborative projects, training, targeted themed events, business meetings and other activities for sharing knowledge, fostering innovation and bringing products and services to market to speed up energy transition in the Mediterranean and African context.

The CEA’s Regional Operational Representation was established in Tunis during the visit of President Emmanuel Macron in February 2018. Its aim is to help the development of scientific and industrial partnerships and strengthen cooperation on strategic projects, such as energy and digital transition based on innovation and technology for industrial companies, and also in the field of health and its applications.