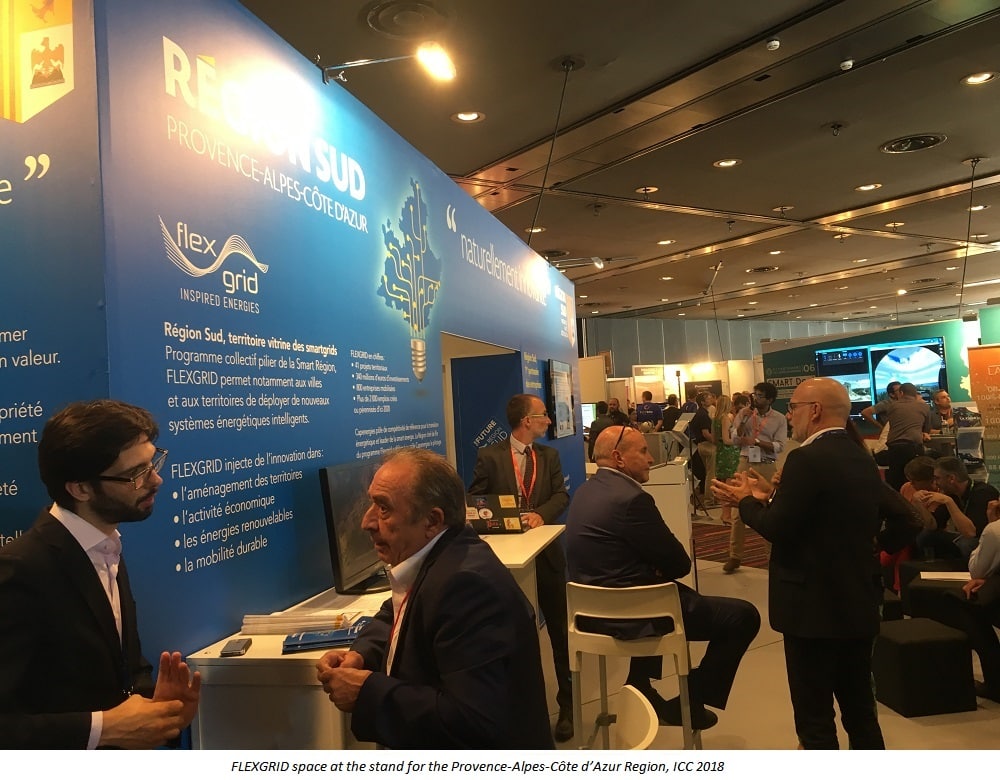 Once again this year, players from the smart grid sector, the FLEXGRID ecosystem and the Capenergies cluster joined forces to present the progress of the programme and their novel solutions at the Innovative City Convention (ICC), backed by the Provence-Alpes-Côte d’Azur region. With more than 3248 participants and 139 exhibitors from 77 different countries, the 7th Innovative City Convention confirmed its status as a major international event for the smart grid industry. It attracted a broad professional public: representatives from cities and urban communities, developers, companies and foreign delegations.

About 30 companies showed up to represent our smart energy grid

A total of 29 companies from the smart grid sector and members of the FLEXGRID Alliance or the Capenergies cluster came to exhibit their innovative products and services. Some of them – chosen within the scope of the regional expression of interest – were given a stand in the new area of the show devoted to start-ups.

As members of the FLEXGRID Alliance, several companies chose to speak at the conference devoted to the FLEXGRID programme where they were able to present their know-how and products:

“The opportunity offered by FLEXGRID to present our ‘smart building’ concept to an audience of differing profiles and potential clients was not to be refused. There certainly is a real demand for export!” said Xavier Bon, the Chairman of MIOS, a company that develops safety and energy efficiency technologies for buildings.

The smart solutions proposed by these companies rely on renewable energies and digital concepts to reinvent energy systems and mobility of the future:

“Though we are not targeting an urban market, Aurélie Bringer, Director of the FLEXGRID programme, nonetheless convinced us to take part in the ICC 2018. We welcomed some major groups to our stand (Decaux, Airbus) with which discussions are still ongoing today, and we were asked by the Swiss Solar Impulse Foundation to take part in the ‘1000 solutions ‘challenge. During the 2-day event, we also met  a number of economic and political players from the region, which helped boost our reputation in the area”, said Alain Janet, Chairman of Solar Cloth System, a company that is developing photovoltaic fabric designed to adapt to the surfaces on which it is installed.

PROMOTING THE DYNAMICS OF FLEXGRID

“Our role is to explain the energy strategy being deployed in our regions. Our approach is all about demonstrating and innovating.”  As stressed by Yves Prufer, Director of the Energy Performance Agency in the Nice-Côte-d’Azur metropolis, it can be seen that companies, regional politicians, local authorities, members of the FLEXGRID Alliance and the Capenergies cluster are fully mobilised. Progress made in smart grids and hydrogen was the subject of no fewer than 11 ICC conferences in 2018.

For the first time at the show, the synergy between hydrogen energy, renewable energies and other renewable gases was broached by Nicolas Peugniez, strategic analyst at GRT Gaz, who was invited to give a talk on the future of hydrogen at the conference organised by Capenergies.

These different presentations challenged the public operators, urban communities and territories (i.e. 25% of the audience) on the role of FLEXGRID as a lever for growth and innovation, as well as stimulating the interest of the international delegations in attendance.

“We were able to meet with energy management professionals, developers and operations managers with whom discussions are underway. Thanks to the strong participation of international delegations, we were able to meet representatives of certain markets such as China, Canada and even North Africa. We hope to sign partnerships with FLEXGRID players and are thrilled that the territorial authorities are interested in our services”, said Frédéric Demarez, Director-General of Agroasis, a company developing an agro-energy greenhouse solution for arid regions.

Bernard KLEYNHOFF, Chairman of the Commission for the Economy, Industry, Innovation, New Technologies and Digital
Solutions in the Provence-Alpes-Côte-d’Azur region, and François PERZEFOU, Project Manager at CEA Tech, during
the conference called “Technology research inventing the future for the South of France” organised
by Jean-Christophe CLEMENT, Project Manager at Capenergies.

While FLEXGRID showcases the French know-how in smart grids for overseas markets, closer ties are being built with key energy stakeholders in Quebec, led by the Côte d’Azur team at the ICC 2018. Quebec intends to reduce its fossil fuel consumption by 40% and increase its renewable energy production by 25%, which is why it is looking for innovative solutions and partners.

The town of Lac-Mégantic, which signed an agreement with Hydro-Quebec in 2018 to deploy the first electric smart grid in Quebec (1.2 MW of PV power, 300 kWh of storage, and automated equipment in buildings) was particularly interested in the FLEXGRID model. The town has set its sights on becoming a reference in smart grids after having suffered an environmental catastrophe in 2013 (derailing of a train carrying oil).

Fabienne Joly, in charge of sustainable development for the town’s reconstruction department, would like to “take advantage of the lessons learned from a programme such as FLEXGRID. We have much to learn from current FLEXGRID applications, not only in terms of technology but also in terms of governance, funding and economic models of projects. […]  We have discovered a number of mature technologies developed by French companies, such as the Lumi’in smart street lamps. We are continuing discussions with the Azzura Lights Company, which offers an interesting methodology for the co-construction of energy-based projects that would enable us to better involve the community in our own reconstruction project. “

Last of all, a memorandum of understanding has been signed by the Quebec Nergica cluster and the Capenergies cluster to foster collaboration between the renewable energy sectors, particularly on the ‘smart mountain’ (adapting technologies to cold climates) and the ‘smart island’ (problems of isolated sites) concepts.